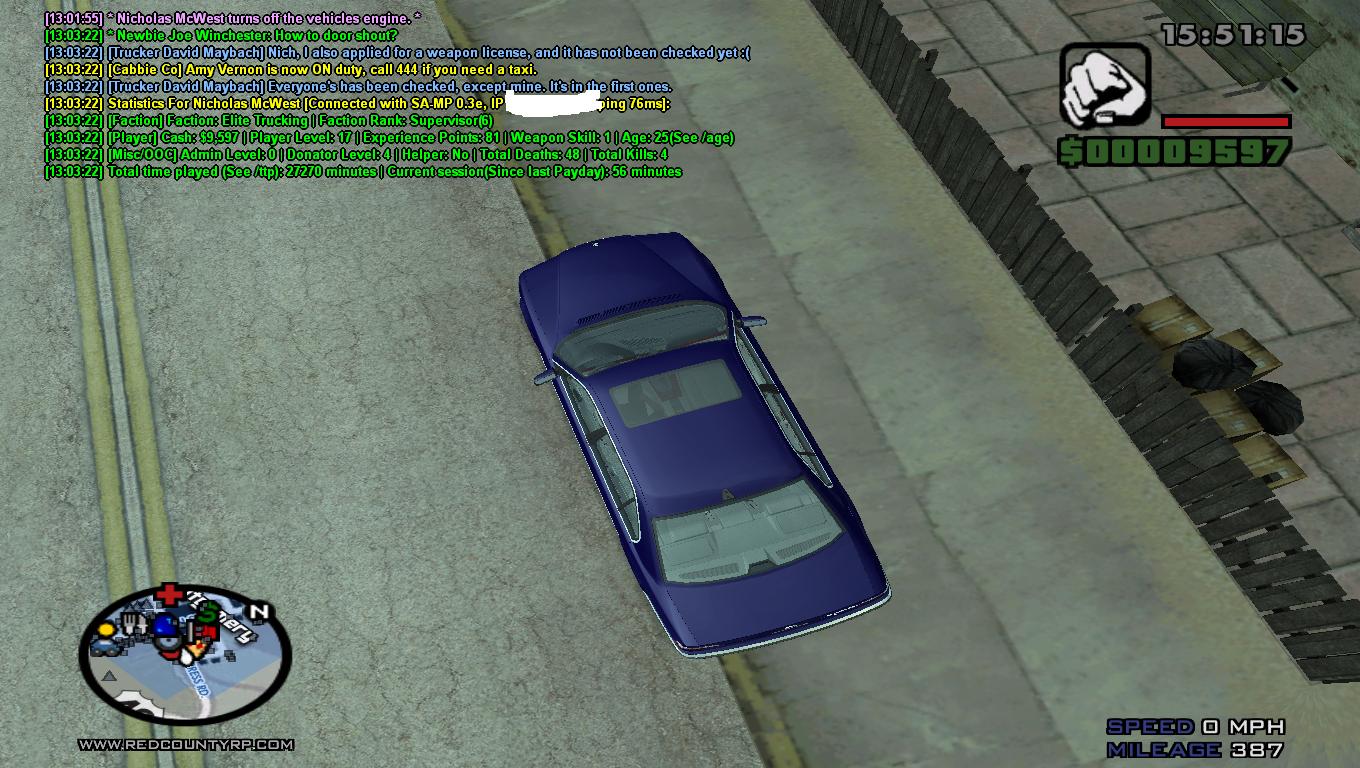 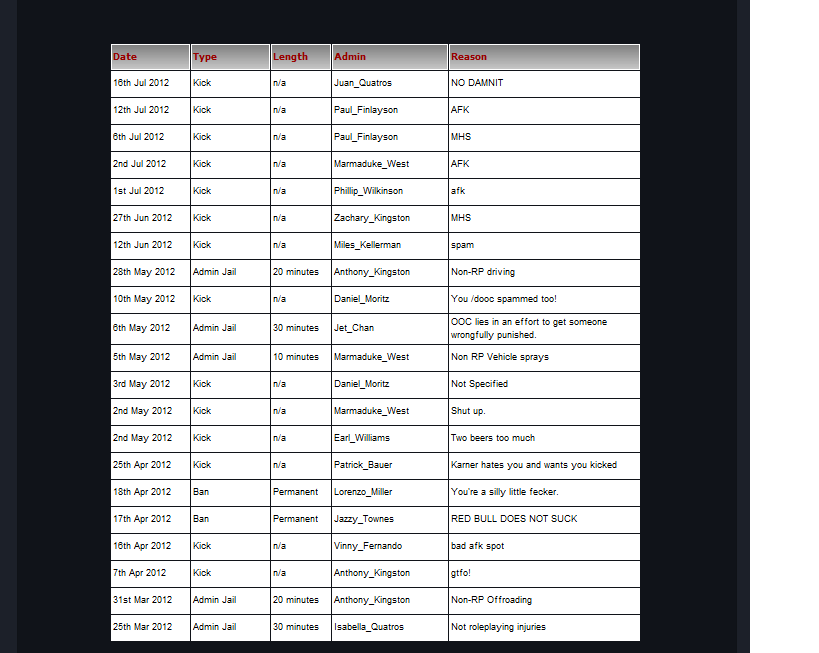 Why do you want to be a helper? (Min 100words)
I would like to be a helper because I see a lot of people asking questions which I feel I can answer, in a good quality unlike some who put 2 words, I myself was once new to this server, and yes there was some good helpers. However there was also those who confused me and I would like to stop all this confusion and simply work, efficiently. Also, myself personally, I get a sense of achievement when helping others, and when I see them answering newbie questions, I can think to myself that it was me who got them to be able to answer.

What do you think is the purpose of helpers? (Min 100words)
The purpose of a helper, is to give truthful answers to those who are requiring help or they're simply new to our server/script and need to ask a question and get it answered in an efficient way, so they're not confused. However, there also here to help people, who might be a little new to the way the RCRP RP works, as it is unique. For Example, someone who might be provoking cops, in some lighter RP servers this is allowed, However in RCRP it isn't and you help them with their mistakes so they do not get reported or banned, from In Game.

If you became a helper, how much of your time would you dedicate to "helping", both IG and on the forums?
Around 6 hours a day.
Section 3

What is metagame? (Min 50words)
Metagaming is using OOC Information ICly. For Example: *A walks up to B saying "Hi B" without knowing his name ICly and simply just uses the nametag above B's head.* or /pm a Where are you? /pm B Monty General Store /pm A On my way *B goes to Montgomery General Store*

What is powergame? (Min 50words)
Powergame is doing something that would not be possible in real life. For Example: /me takes A out of the car, kicking him several times in the head and chest until he dies. This is deemed as powergame because it is not giving A a chance to resist.

If a newbie asked you (Using the correct OOC method) what to do with the 4 numbers the just came up on the right hand side of their screen what would you respond? Please use your imagination and respond to any retorts you feel they may make (Retorts means follow up questions- and remember this is a brand new player) (Min 200 words)
/n The 4 numbers that have come up on your screen, are your unique paycheck number for this hour.
/n What can I do with it?
/n You can sign your check by going to a Town Hall, located in either Palomino Creek, Fort Carson, or Angel Pine
/n Alright, how often do I get these?
/n You get a paycheck every xx:00 hours, which goes by IG time, which can be seen using a watch. However the experience points you get vary on certain things...
/n such as how long you've been playing since your last paycheck can be checked via /stats. If you've been playing for under 31 minutes you will not receive a paycheck, 31+ minutes is 1 exp point, 61+ is 2 exp points and 91+ is 3 exp points, however you can obtain more, by donating to the server, which allows you to get extra exp points.
/n How can I donate?
/n You visit the forums which are located at http://redcountyrp.com/forum and register an account if you haven't done already, and click on the donation forum and follow the instructions.
/n And how much more exp points will I get?
/n Well that varies on how much you donate, however all the information can be found in the topic located under the donation forum named "Donating to the server"
If someone approaches you on the street while you are RPing (Say RPing getting your car fixed with a mechanic) and asks in /b "Where can I buy a car" what would you respond? (Min 100 words)
/b You can obtain a car from another player at any level, simply find someone ICly who wants to sell their car and do a deal for a price, then get them to /sell car to you.
/b Alliteratively you can obtain a car from a dealership located in Dillimore, however this requires you to be level 3+ or the one located in Montgomery which requires you to be level 5.
/b Just remember if you buy it from another player, to /savecar somewhere that you can remember to avoid loosing the car then having to wait for an admin to teleport it to you.

Describe your favourite RP experience on RCRP in full detail (Min 400 words)
My favorite RP experience on RCRP would be when I first joined Elite Trucking, recently after our HQ was burnt down by CHC, and we was made to rebuild it, using trucks that we had left and our employees. I personally enjoyed this RP because building was a new kind of RP to most of at Elite Trucking, and was a chance to learn some more about this subject. Also the /me's had to be so detailed such as /me bends down extending his arm, picking up a rectangular brick in both hands, standing back up.
/me places the brick above the cement, holding it in place for a minute, releasing his force. I love doing detailed /me's purely for the reason that it shows those who pass by of what RCRP can really do, if you put some effort into it. Also there was a sense of achievement at the end of it, we all got paid some money, those who stuck it out anyway. We could also say to people that our HQ was built by us for us.
This particular RP was also enjoyable because at the time I was quite new to Elite Trucking CO, and was a chance for me develop a relationship with my fellow employees, also a good opportunity to learn about our trucks and trailers, and just a nice time to spend 3 hours. Straight after that Aperture and RCPD turned up on the scene, and this was also a really good chance to develop some friends ICly, then after they had left our scene, we all decided that it had been a hard day and was time to go down to the local pub, for a drink. Where we had a good laugh both ICly and OOCly.

I personally enjoy new RP experiences, not just those what are repeated such as being pulled over by a cop, and being ticketed straight away, I love to develop all of my characters as much as possible. For Example if someone comes into my office at Elite Trucking and asks me "How do I apply?" If our applications are not open I will not simply just say no, I'll get to know them as much as I can, and gather some information about them, so if in the near future recruitment does open I can contact them, informing them that our recruitment is now open and tell them to come down to my office and apply. I also RP everything from crashes to drinking.

What is the best faction on the server, and why? (Min 400 words)
My favorite faction on the server, and I do not want to seem biased as I am a Rank 6 in the faction is Elite Trucking, I purely think this is the best faction. The reason being it leaves so much open opportunities for RP, such as convoys, like when I was a Rank 1 we did a convoy which included 6 of our trucks, we went through towns, had some food, we then did a tour around San Andreas, before heading back to HQ, where we parked up and had a chat about that particular convoy.

People also say that Elite Trucking - is a good way to earn money, because we do not have limitations on our /truck command, however I do not particularly favor this idea, if it is just there to /truck, I don't mind it when people use it to RP and earn money, such as gathering a group of employees and choosing one load and going of together and RPing a convoy. As it can be a realistic way to earn money, instead of robbing stores all the time. I also take my time to help those who are new to Elite Trucking and can't seem to detail their RP with trucks, and I like to sit there and help them to my best ability. This way instead of telling them that they're fired for not enough detail in /me's they can improve their /me's.

It also leave opportunities for RP such as loads for other factions, I'm always trying my best to organize some RP for us that include other factions such as Axiom or Aperture, as we are a branch of Aperture, they have gave us a few RP loads from Montgomery Warehouse to Abandoned Airport, this is good because we couldn't simply turn up at the warehouse and reverse in, we had to turn up prior to the load, and look at entry points, and the merchandise. Which then allowed us time to go away and draw up a plan of what was going to happen and how it would happen. We are still planning the load, as we're waiting for Aperture's contact. Telling us to go ahead and do the job. However, when they do I plan to take 3 of my finest drivers, to the job and show other factions that we're not all about /truck that we are also about RPing.

Additional comments, here you should include any extra evidence of you helping newbies, or explanations for any bans you have undergone in the past. You may also add suggestions or comments about the helper team as a whole.


By posting this application I hereby declare that all of the above is true to the best of my knowledge, if I have lied and this is discovered by an admin then I will be banned IG and on the forum for 7days. I understand that if I have been banned from posting applications to be a helper either for a long period of time, or just temporarily I will not post this application until my ban time has run out or risk being perma banned from applying to be a helper and may face IG punishment.

To the thread starter,

The helper administration team is sorry to announce that your application to be a helper has failed the first stage of the application process. The reasons for this are as stated below:

- 2 words short on the powergame question I'm afraid, regardless we looked through the rest of the app.
- 1 spelling error we could see in the 4th question of section 3. Loosing instead of losing.
- A few more grammar errors "... we was made to rebuild it..." should be we were made to rebuild it. And a few others I'm sure you can find yourself.

Please do not re-apply for the next 7 days. If you fail to follow this simple rule you may be perma-banned from applying to be a helper. Better luck next time

Yours faithfully,
The Helper Administration Team

Just wanted to let you know, you were pretty good on the spelling side.