Introduction, general information
Georgia is an Eastern European country, located just under Russia in the Caucasus mountains. Its neighbours are Turkey, Armenia, Azerbaijan and Russia. Just like other Eastern European countries, it’s divided into different regions, which have different cultures but share the same Georgian language.
The different cultures include the fact that the last names differ as well. Some regions have unique endings to their last names, indicating where one’s from. The people from each are stereotyped differently, for example, people from Samegrelo tend to be liars, others from Svaneti and Racha are mocked for talking slowly, Kakhetians are lovers of feasts, etc. 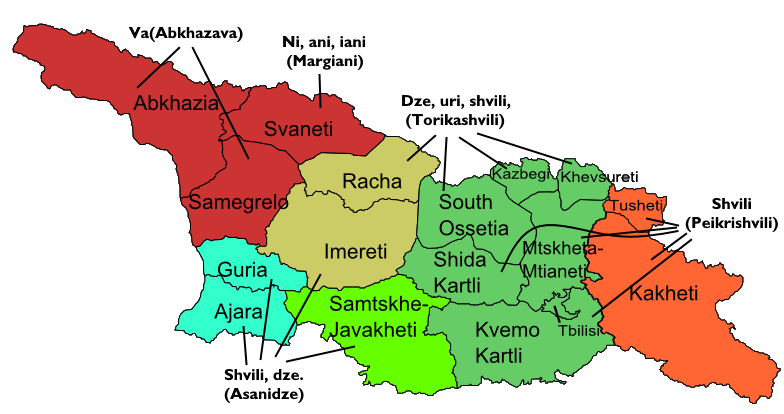 Living conditions and the general lifestyle
Because the country declared independence twice in the past century, went under soviet dictatorship and had a fair share of Post Soviet Union problems. The people living here are hard, difficult and problematic for outsiders. The country lacks a decent, non-biased and non-stealing government. Corruption is taking a toll on the locals along with the inflation caused by it.
Generally, jobs don’t earn much more than 300-400$ per month, and considering that some move from regions to the capital to live, the added rent of around 150-200$ gives them nothing to spare. The majority of the Georgians have at least a Bachelors degree in something and still work as Taxi drivers or construction workers. Even though it’s that hard, Georgian people always find resources to feast once in a while, as it’s a lifelong tradition. There’s a tradition of saying a toast at the table, and there’s an order too.

Outside of the country, Georgian migrants
Because of the difficult working situation in the country, many of the people, including females, leave to find a better place, to provide for their families. While females go to usually take care of the elderly, most of the males find work as shoplifters, burglars or figures of higher crimes.
People end up selling properties (houses, cars, jewellery) or taking out loans to afford the travels, as they’ve got to pay more for an illegal stay or an illegal trip if they’ve been deported before. Yes, you’ve heard me right – people who work illegally outside of Georgia often get caught and deported back here, only to return in half a year maximum.
Usually, the main directions are Turkey, Greece, Spain, Italy. After landing in any of them it’s easier to cross borders and go somewhere else, preferably Germany or Switzerland because of the deportation laws. A few of the lucky ones end up in the USA too.

Georgian males, what are they?
The majority of us and a bit elderly people as well, grew up spending most of the time outside. When you’re there, you usually hear legends about Thieves in law and Goodfellas. But it grows more and more into you. Then, suddenly, you’re sitting at a table with your relatives, drinking wine and enjoying the toasts when one of your uncles slides out a new Browning Hi-Power, or a real Baikal 442 – Makarov pistol. That’s it. You want to be in the streets too, it’s fun, right? The guy has cash, weapons, most likely hookers too, you don’t know about drugs yet – you’re 12.
That’s why the interest stays there, everyone knows everyone and if you fight, you usually ask around to make sure the guy you want to beat the crap out of, isn’t your friends' friend, or even a relative in some way. Sometimes, if the kids are unable to solve the conflict, elders talk it out, they do the asking around and in some way or another, it’s taken care of (Tema, explained below). Your uncle tells you to forget about it and you don’t, now guys your age know that you’ve got someone behind your back right? You can act like the big shot, it’s not a problem.

What do we like, dislike, enjoy?
Usually, guys who follow this mentality hate working, rarely study or do anything productive. They spend most of their time outside, where they learn how to talk themselves out of situations because sitdowns are a major thing as mentioned. There’s a thing called Tema (A Georgian name for a light conflict, which requires a sitdown). It means a meeting between the two individuals or two parties, who are unable to solve the problem within themselves. Georgians who spend their time outside, often find disputes with others. It can be about a girl, or someone saying something behind a guy's back, stealing from a person he shouldn’t have stolen from and etc.
Just like peers their age, many of the Georgian males take drugs, but for some absurd reason, they hate drug dealers. They’re heavily taxed in every district and aren’t taken as normal members of the society, they’re seen as the scum. Georgians dislike cops as well, not only because of the mentality but also because many of them are angry, bitter guys who couldn’t oppress anyone in their teenage years. More than the police, Georgians hate the people who cooperate with authorities – Snitches.
The positive is that, compared to other Eastern Europeans, Georgians respect females and mom jokes and insults about them isn’t accepted at all. Also, the desirable lifestyle comes from the usual Gangster movies such as Godfather, Goodfellas, A Bronx Tale, Carlito’s Way, King of New York are the usual choice for these types of guys. Georgians have their honour and are willing to risk everything to keep it intact. They also follow Orthodox Christianity, so any comments about religion aren't appreciated either.

The general structure, Thieves in law
Most of the guys still follow the Thief in law mentality. The laws are mostly the same in Georgia but tend to differ when people are in Europe or the US. People here are still getting extorted, scammed or scared into paying money.

There’s usually crews of 4-5 people, which have a certain authority figure backing them. The ladder’s just like the Italian mafia, the only difference is the Obshyak watcher (Asset gathering watcher, Makurebeli in Georgian) who watches over the groups' wealth and manages it. The guys usually run crews in prisons too and have people in line if anything’s to happen. Mostly they’ve got bribed people in Law enforcements to further cover the crimes they commit. Most of the document forgery is done with the help of small-time government figures such as parliament deputies.
The lowest are the guys who do the hard work – street guys (Outsiders, Kuchis bichi in Georgian), then there’s a support group, split into two parts, physical and informational.(Insiders, Kai bichebi in Georgian). They’re watched over by authorities and there’s a guy who takes care of the Obshyak (Makurebeli in Georgian), watching over groups finances. At the top, there’s a criminal authority figure, mostly a sworn Thief in law.
In lesser developed groups there are only just street guys taking care of it all, with some kind of support from the starry fathers (Thieves in law).
Georgian crime is strictly connected to post Soviet Union countries, such as Ukrainian, Russian, Armenian. There's no such thing as "Georgian Mafia" solely, but there are a lot of Georgian Authorities in various different crime groups. Such as Mindia Goradze (Lavasogli) and others who cooperate with others to earn their living.

A criminal lifestyle outside of the country
As already mentioned, Georgians earn money by shoplifting, burglary, document forging and extortion. They might look like smaller crimes, but once they add up it's a lot. The kind of people who do this, usually know Russian very well, so they end up with other Eastern Europeans such as Ukrainians and Russians. This forms a basic crew.
Crews operate in a usual way. One finds clues, another one’s a master locksmith, the third one usually goes in to get the score and the fourth guy stands the corner, watching out for the buddy. Then the items are stored safely before they’re sold or sent home and split afterwards. The crews usually keep some kind of an Obshyak (Asset gathering) so if the thing goes south they have the money to escape, or if deported back to Georgia, to return illegally.
A few of the lucky ones manage to earn enough and return, running businesses ranging from 24/7 stores to hair salons, but, others stay there for years to keep earning for their families back in Georgia.
According to the sources, Georgia has produced most of the Thieves in law from any post-Soviet Union country.

While developing a Georgian (Or a character originating from Ukraine, Russia, Armenia, who follows the Thief in Law mentality) keep in mind that there’s a lot of room for creativity and livelihood of the character. The problems could vary from medical conditions to addictions, divorces, hiding from loan-sharks, etc. There’s no need to make the basic Eastern Goon, who’s 2 meters tall and weighs 100 kilos.

The guide is still in development, and if there’s any feedback feel free to post here or text me in Personal messages. It serves as a guideway into Aghordzineba.

i've been laughing for 30 minutes straight