[Updated]Daniel Sanchez - The life of a snitch From a G' to a snitch​
Early life​
As a kid, Daniel was in a small poor family of 5 members, with his blood related brother Cesar since day one he was adopted from a Mexican couple which had the idea to get more workers for their small farm in Mexico. Their parents didn't pay them attention, which if they did both of them wouldn't be here today.


Black Ministry and leading a new way of life​
Because in Mexico his family could only pay for school till 5th grade for the three children, they've decided that it was time to stop Daniel's and Cesar's education, when his father died and his mother couldn't find a job, the little Daniel and Cesar were introduced in the dark side of their little town. Selling weed from friends, he was holding the whole family of 4 people on his back. Because their mother wanted Daniel and Cesar to continue their education no matter the cost, she sent them in Los Santos. Being introduced to the illegal side at such a young age, both Cesar and Daniel didn't go to school, instead they went to their bigger brother Carlos Sanchez who gave them two revolvers which they still have today, weed to sell to start building their /street reputation/ and some cash for beginning then he left them on the street to see how they would survive. At the age of 13, Cesar went away from his brother back in Mexico and Daniel was again...alone. Later when he was selling some weed to one black man he didn't even though it would be his new best friend, and it was him...Rahim Johnson. Daniel was introduced by Rahim to the leader of Black Ministry, Elijah Walker who was also known as E'. After 1 month of working hard he jumped in as Double OG and was already well known in the area where the gang operated, Blueberry. There he met so many of E's contacts but sadly almost every B.M member was killed in a shootout between them and the police. Daniel was one of the survivors but when he was being transported to DoC the cruisers were attacked by the survivors and Daniel was returned in Mexico to avoid being imprisoned. 6 years later,


Montgomery Avenue Locotes 13​
Daniel receives some bad news, the biggest brother who gave them everything in the beginning, Carlos Sanchez was killed in a failed attempt where he tried to evade the police... or atleast that's what he was told. Daniel was crushed, he went back in Montgomery and met his brother Cesar. Later his brother told him about the new gang Monty Avenue Locotez 13 and both brothers joined them. Daniel chose the nickname Smallfoot in memory of his lost brother Carlos Sanchez who was known as Bigfoot. For such small time, the whole police of Red and Bone county knew about Daniel Sanchez that even DoC wrote an article about him 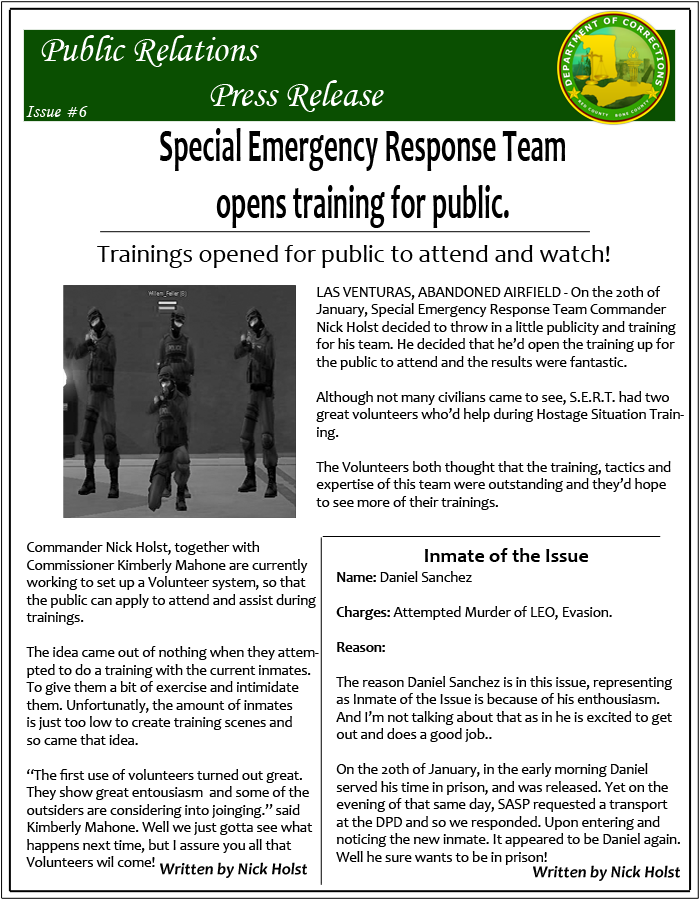 . He was being imprisoned so many times for so small crimes but then, upon seeing the news he saw the article about him and he knew that he had to do something and started committing the crimes in a smarter way, leading to him being almost always one step ahead of the law, ready for the next hit, maybe even now he is out, robbing someone or even killing him.and getting away with his brother. 4 years later, MAL13 is no longer a thing, Daniel is now 23 years old and his brother Cesar is 19 years old. 3 weeks ago Daniel and Cesar went in Blueberry to sell some weed, in the streets of this dangerous town they saw black Tahoma heading towards them. Two of the people in the car leaned out of the windows with k's and nines as they started shooting at the brothers and then leaving the scene with the impression they would just die due to losing too much blood. Cesar was hit 2 times in the chest and 3 times in his left leg but Daniel was hit only once in the left shoulder.After Cesar falling unconscious Daniel rushed him in his flat where he tried helping him but with no luck, This very day Daniel lost his only true friend and relative, Cesar.


[PWC early era]​
.A week has finally passed, Daniel is still locked up in his flat, drinking cheap bear and still in a shock after the recent death of his brother Cesar. The money he once had eventually disappeared and he had two choices, to stay there and rot in the hole till he dies or he could sell his flat to get some cash to begin his new life with and head over to somewhere else. He chose the second option, taking his almighty pistol with him, he got into his Tahoma and went away from Blueberry, heading over to Palomino Creek where he sees something which stuns him in one place, Christopher Harris, a G' which he lately befriends is on the ground and bleeding, surronded by his friends Will Harrison, Quinton Malik, Tyrone Malik and Jalen Malik. At first look Daniel seems to be just shocked from the bleeding man, but inside he's panicking as he sees almost the same image when his brother was dying from the shots fired in blueberry. He quickly takes out a first aid kit and heads over to Christopher, after managing to seal the wound he befriends the group and soon enough starts hanging out more often and often with them, eventually and now knowing getting dragged back to where he started from, the illegal side of his town.

From a G' to a snitch​
Weeks and months passed by and Daniel eventually got finally arrested, with officers threating him if he won't cooperate he will get imprisoned for life, Daniel chose something which he never thought would be his job, a snitch. He dealt a lot of damage to Palomino West Clique, ranging from busting a few drug deals to bigger things, like getting many members imprisoned, busting weapons deals and eventually letting the warrant of Quinton's house to get approved, giving the police the ability to raid his house, unfortunately for the gang the time finally came with S.W.A.T busting through the windows and door in Quinton's house, unfortunately for them Quinton was not inside but still had his weapons and drugs taken, the damage was irreversable. More than 10 AK-47's, MP5's, Shotguns and pistols seized, leaving Quinton with only a few guns he had stored prior the events in his Huntley. Soon rumors about a snitch being in the gang appeared, Daniel tried his best laying low and giving only the small deals to the cops but eventually they got him under pressure, if he did not get them a big thing in one week window, he would get imprisoned for life. He gave them the radio frequency and the details of the next big drug deal, Daniel was present on the scene and was ready to inform his friends to run so he can look more legit in their eyes. Unfortunately his plan failed as the cops got every single member except Quinton and the original group, Christopher, Will, Tyrone, Jalen and their new homie Darryl 'Duck' Conwell. Daniel has had already gained their trust and they had no idea he was behind those police raids but eventually they started getting suspicious, he was always on the phone and that's where the faith played him a bad game. A few weeks later while the group was in Quinton's place the blocks exploded, somebody has bombed them with a C4 and the whole group got trapped in the house, with the door launching towards Will Harrison and instantly killing him, the group survived. The very same day Will Harrison's funeral had taken place in PC graveyard where every OG stood there, saluting him and showing respect. After more raids and police busts the group had enough, after a few generations of the gang they started suspecting Daniel, do you remember when it was told being on the phone could and will play him a bad game? Well..Quinton gathered the new members of his group along side Christopher, Tyrone and Jalen, then they parked in an abandoned construction point in Las Venturas pretending like they had a deal soon. After shooting Daniel in the leg and getting his phone they realized he was a snitch, Daniel pretended like he was trying to beg for Jalen's mercy and got in his Voodoo which had it's engine running. Unfortunately for Daniel everything has it's end, as his leg was bleeding he started feeling dizzy eventually making him crash in the bridge on his way to Las Payadas, leading him to getting launched through the windshield and falling to his own death, as the gang arrived he was already dead, but to make things sure they launched a single bullet to his skull, and till this day his corpse is still rotting in the desert under that very bridge, warning everyone that if they choose the snitch life, they will eventually end up like him.

((Nice story man. Could I recommend paragraphing though, as I struggled to break up the text whilst reading. Other than that top job mate

** Eric smiles as he finishes reading. Feeling a rush and sense of adventure, he turns to the next page. **

Updated, format like I promised 2 years ago, MAL 13, PWC, his snitching life and eventually the dead end.

nate cole not ur friend? fk u

This is honestly a really good character story, and great character development.