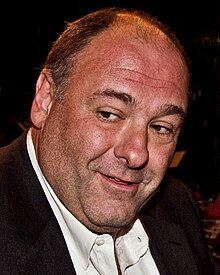 James Joseph Gandolfini, Jr. (September 18, 1961 – June 19, 2013) was an American actor best known for his role as American Mafia crime boss Tony Soprano in the award-winning HBO series The Sopranos. Gandolfini garnered praise for his portrayal of Tony Soprano, winning three Emmy Awards, three Screen Actors Guild Awards and one Golden Globe Award for Best Actor in a Drama Series. Gandolfini's other notable roles include the woman-beating Mob henchman Virgil in True Romance (1993), enforcer/stuntman Bear in Get Shorty (1995) and as Carol, an impulsive Wild Thing, in Where the Wild Things Are (2009).
Click to expand...

It's been an year and a few days since my favourite actor passed away. After watching Sopranos and briefly analysing Tony Soprano, I couldn't imagine James would die due to a heart attack. It shocked me, but what can you do? Rest in Peace, master - You shall not be forgotten. Thank you !

Moved to the correct section.

Speakybutton said:
Moved to the correct section.
Click to expand...

Right, thank you. Sorry for not posting it in the right from the very beginning but I was more concentrated on writing a good thread.