The white supremacist movement in the United States is a variety of different types of groups, traditions, beliefs (including various religious ideologies), and subcultures. An adherence to shared white supremacist beliefs may be the only thing a 16-year-old racist skinhead from a poor neighborhood in a Texas suburb has in common with a 65-year-old small-businessman, and neo-Nazi, from Cleveland, Ohio.

When people think of white supremacist groups/gangs, they might think in terms of a traditional, formally-organized group, such as the Ku Klux Klan or a neo-Nazi group. However, gangs are an increasingly popular alternative form of organization for white supremacists. White supremacist gangs typically combine a gang structure, subcultural elements, some degree of ideology, and criminal activity.


Sheri Joyce Hixon said:
White gangs are classified into two categories: philosophically oriented groups, and the utilitarian oriented groups. The philosophically oriented groups such as the Neo-Nazi skinheads also referred to generically as Skinheads tend to focus on promoting white supremacy. Their crimes are usually motivates by bias or hate towards other people they perceive to be inferior. The utilitarian white street gangs also support white supremacy. However, they tend to focus more on mainstream gang activities including the sale of narcotics, burglary, robbery, witness intimidation and other crimes believed to build power, influence, and respect among the gang population both on the street and within the prison system.
Click to expand...

Many white supremacist gangs pride themselves on their ink. Below is an example of some of the tattoos they were, but for a more in depth detailed look at the various types of hate symbols, click HERE. 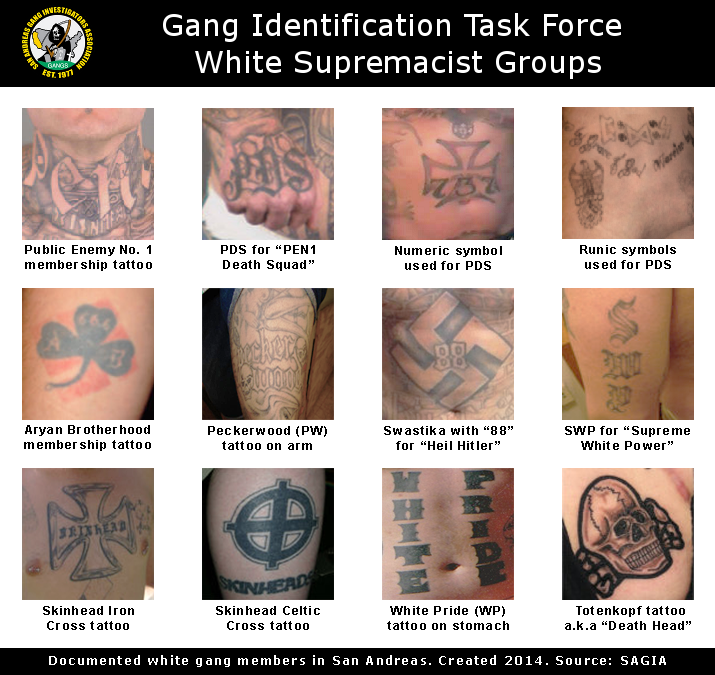 Character Background (anyone interested in joining Swamp Valley, read this)

Q: Where should your character be from?

A: If your character starts on the street, it is suggested that he is from the area he will role play in. For example, if you want to approach a currently active outside sub-group/white gang, then the normal thing would be that your character grew up in their area. If they are from Las Colinas, then your character should be from their area in Las Colinas. It's basically the same as it is for any race gang. They recruit younger people from their area. The younger generation keeps the gang moving. The person is shaped up based on the place he grew up in. Different upbringings, different cultures. It's highly suggested that you don't use an unfitting character (biker, mobster, redneck, ex-cop) to join skinhead gangs. Nothing in our faction has anything to do with those concepts.

Good Example: Snake grew up around the trailer parks in Las Colinas. It was a matter of time before his bigger homeboys took him in the gang.
Bad Example: Snake moved in from England yesterday. He is looking for a cool white gang to join.

Q: Can my character be half-Hispanic?

A: Yes, he can be. The scene is friendly to people which are part Hispanic. White gangs were influenced early on by Hispanic gangs, so they have no problem with the cholo thing. White gang members also often have Hispanic girlfriends and wives. It's about numbers. Your character can even be Jewish. Nobody cares about your ancestors. As long as you are born in the USA and are American, that's all that matters. Can the character be part African-American and get involved with the faction? No.

Q: What age is appropriate for my character?

A: This is up to you. A young age leaves room for development in your character. If he is a bit older, he should have went through more events, and not be played as naive and clueless. The ideal age for a new character would be somewhere between 17 and 20. Old enough to be involved in crime. How fast you age your character, is up to you. White gang members are generally young. They can more easily get brainwashed by their elders into doing crime. Our faction revolves around crime, so your character needs to be old enough to be involved in it.

Q: How does racism exactly play into characters?

A: Even if your neighborhood is predominantly white, Red County as a whole is very diverse, with a lot of Hispanic and African-American people. You didn't grow up in some redneck swamp in Alabama. You can't be aimlessly racist, it needs to have a background or story. You can't just walk around and beat every single minority you see. Your character doesn't necessarily have to be racist to fit in, but a lot of PENI members are, and almost all at least live by the "white pride" ideology of being different than other races and being proud of their heritage. The white supremacist gangs often use race as a recruitment tool, but at the end of the day the members still bond by friendship, partying together, and getting high together.

Q: What is the culture that my character grew up in?

A: PENI started as a punk rock gang. This means that the original members, as well as the new members to some degree, are into punk rock. Not metal, not country, not classic rock — hardcore punk. Of course there are exceptions, but the stereotypical character hanging with people who are heavily into punk rock — will also be into punk rock. There's also RAC (Rock Against Communism) which is music espousing white supremacist ideologies through lyrics. This is on the extreme side and also something PENI members may listen to if they carry a strong belief. Rap is a big thing and you can also catch a white gang member listening to it. The peckerwood/skinhead types are into lifted pickup trucks and dirtbikes. A lot have surfed or skated growing up, depending on where they're from. Most of them dress like flatbillers or copy the Hispanic gangbanger look.

Informative guide, scary to realize though one of my friends has these exact runes tattooed on his back...
Time for a new friend

Give credit where credit's due. Both you and I know that you didn't write that.

Paul Parks said:
Give credit where credit's due. Both you and I know that you didn't write that.
Click to expand...