[Guide] How to RP as an Irish-American criminal/mob member

Most of the Irish-Americans that RP in mobs are mostly 3-5th generation Irish-Americans. That means your accent would rather be weakened by the influence of the american culture over you. RPing as a fresh-off the boat Irish person wouldn't be a wise idea. Use an American name, avoid speaking in stereotypes that means you won't be saying 'lad' at every sentence. Your origin city of birth would be an east coast city like Miami, New York or similar or a mid-state. It'll less likely be a west coast.

Irish mobs are known to accept other nationalities than Irish-American. There has been cases where British/Italians/Germans and etc were accepted and integrated into the community, though it is preferred to become an Irish-American as it'll help you climb through the ranks at a higher pace. Irish organizations are known to be very racist. They'll disrespect minorities such as blacks and Asians. It is preferred that you'll be labeled as 'white' or Caucasian to the mob.

Many mobs will go through their way of making small jobs such as hits, robberies or similar. They'll for example steal a small clothing store and sell it's products at a pawn shop. Another example is burglaries, you'd steal let's say TVs or stereos and then sell them. It is an amazing way to earn money ICly, but not scriptly. Another way would be by accepting small hits once you've been integrated although it will be once you've reached to a higher level in the hierarchy. An amazing way to earn money, create passive RP and engage with others is by robbing truck trailers or ship goods from FC docks or BB trucking terminal. It's fun, easy and efficient. It isn't logical to obtain 10 grams of cocaine then go over to every corner in Montgomery to sell your products. The only time where you'd be selling is in cartel deals or mob recognized deals. Below are examples of passive RP that you can engage in as a mobster member.

- Talking with other members.
- Dice or other forms of gambling
- Drinking
- Testing or trying a new experience in a drunk or a drug
- Brawls or friendly fights.
- Engaging in social media activities (E-thugging and bullying other people's posts are retarded and may cause your banishment or CK if you e-thug)
- Visiting local bars or cafes.
- Visiting the gym
- You can also RP medical issues, one of the closest and safest medical RPs are dental. You can go to a dentist, RP having a tooth removed or similar. You are a human being after all.
- Sports. RP watching the English games with friends or even chat about it.
- RP with a pet like a dog or a cat. Maybe engaging them in a dog-fight with those friendly skinheads
- RP cleaning your vehicle
- RP emotions. Your first few hits will leave you emotionally damaged in every way, you may feel PTSD following a hit, you'll begin slowly losing it, but whatever happens you'll still not be a ruthless terminator.
- RP a hobby, perhaps RPing a woodcraft hobby or drawing.

'Pimping' You may use the ability to offer females a job as a prostitute and offer it to people or make them work in that profession. Once they're done you may force the person to pay using force. It really depends.

Gambling - Go ahead and play a game of cards for a stack of money. You may also attempt to cheat in the process of gambling. This can be done easily by attempting to replace a black-jack card.

Pornography - Why not distribute a few pornographic films to those who have a certain fetish? You may also attempt to RP large pornographic showings

Theft - You may attempt to RPing stealing vehicle stereos or preforming burglaries. You may also preform robberies on houses, businesses, warehouses, docks or etc.

Extortion - If you have enough power then you may tax businesses operating in your neighbourhood or region of influence. If they fail to pay then you can steal, kill or arson their businesses.

Blackmailing - Easy, but not so popular form of racketeering. You may photograph a criminal preforming activities and extract money from him. A kill-switch can also be used in-case you are killed or similar.

Not To Do List:
- Avoid using sterotype speaking like 'evenin' lad.' Use normal American speaking.
- Don't use 'Irish' accent. Use the county where your descendant from since generations mildly pass the accent through. Or even better use American or city accent.
- Using suits at all occasions. Like any normal human being dress in a shirt, pants, shorts or similar. You won't go walking around in suits all day except in events weddings, parties, court and etc.
- Speak of illegal activites in public. We aren't African-american societies. You won't be coming and saying 'i'ma go kill that busta' (I know that's very stereotyping). But the only time where you'd be speaking of illegal activities would be spoken of in private places like your house or in an office.

Brawls and Fights
In serious manners like an disputes or similar in the streets Irish-Americans would be the first people to pull their gun out. However, in a bar fight it'd be better to use your arms rather than pulling your guns out and go blazing. You may RP having a really bad temper and adrenaline might push you to an extent.

If you don't belong to the Caucasian race then you'll most likely be harassed or badly treated. So, let's say you are an Asian or an African-American then you'll face hatred if you attempt to live in the neighborhood. If you do happen to have a fight with one of the members then don't be surprised to return and have a few guns in your face.

Connections with the drug trade

Your experience with the drugs wouldn't be as much as other communities. You are less likely to engage in taking or trying them. Your drug life will be either short or not so fond. That means you won't be taking extreme drugs like Xanax, heroin or similar. You'd be taking weed or shrooms maximum though the leaders won't be so fond of them.

Your connections to the crime and joining

Your joining to the mob will be given by a green light. Once you begin interacting and talking with mob members you may to transport a small package of 'drugs', myself I don't use actual drugs. Following this you may be asked to preform a clean, successful hit. Once you become trusted you'll be invited. As mentioned before you don't have to be Irish-American, though it'll assist you alot.

Being arrested is a drag down for you. Once you get out of jail that'll mean you are under the threat of being replaced or demoted. Self-snitching is when you talk about illegal activities in public, a detective hears it or posting on social media pictures of you doing illegal activities, Don't be a retard and say 'It's an airsoft gun!'. Arrests will not really be tolerated within the mob.

I'd suggest looking like the first picture rather the second one. It is seen in the first picture a group of friends chilling in a cafe, they look completely normal citizens and aren't wearing suits everywhere. The second one shows something that would be seen in Monty. 2 people in ski-masks who look like they are about to rob some liquor store. It is prefered if you use smart disguises like wearing a suit with a beard and glasses during a hit rather than dressing ski-masks in public. It's retarded 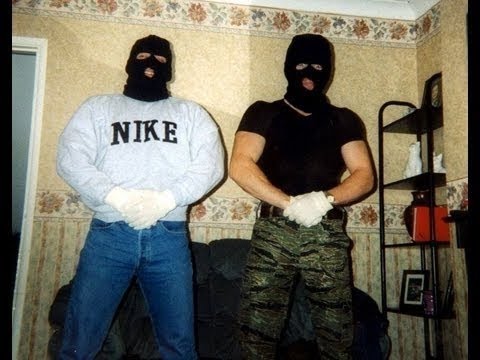 DONT​
How to speak while not ruining the immersion

DO: "There is that guy who keeps following me all day. Can' believe that fool would do that"

DON'T: " There is that lad who keeps follawin' meh' all day. Can' believe that gowl 'd that"

You sound like you just came off a boat and you were a breed between a gay dubliner and a redneck. However, the DO sounds like an Irish-American who slowly lost slangs and accent due to being integrated

DO: "There is that girl from the club yesterday, remember her? She was very nice"

DON'T: "There is that bitch from yesterday's partyah' house, remember the lass? I got a taste of dat box!"

Come on, you sound like a total jerk and your accent sounds like a gay southerner. I'd suggest using a bit of attitude in speaking unless you are joking with someone. Avoid speaking of sex life alot, like it'd be one bring-up in the conversation. Don't use that much slangs again. Avoid using 'lad', 'lass' or 'buck' as said before, these terms will be rarely used.

NOTICE: These rules would differ depending on where your Irish-American is orginally from. Meaning that if your character was born in Texas then you'd have a trace of southern accent. In New York you'd have a much more different accent.

You and the Gaelic language

The Gaelic language is really hard and barely taught. Even to those people who live in Ireland. The only time you'd know Gaelic is that you're from a secluded traditional Irish family living in the country side of any US state or similar. Even if you know it most members won't understand a single word coming from your mouth.

This should help and pave people's paths towards joining and RPing an Irish person. I'll attach helpful guides that might assist you in your RP

RPing A Wise-Guy Some aspects of the Irish mob worked mildly similar to the Italian mobs and families. The ranking structure and politics might assist you.

Passive RP and RPing Emotions Very helpful to those who wish to passive RP which is very important for a faction.

Slangs Only use one or two slang words. It isn't that popular with integrated with Irish-Americans.

Athens said:
Black Mass - It's a great Irish-American mob movie. It's great and you should take it as a small inspiration.
Click to expand...

Athens said:
Black Mass - It's a great Irish-American mob movie. It's great and you should take it as a small inspiration.
Click to expand...

OT: Great effort I'll give you that, and I thank you for knowing how to speak.

OT: Great effort I'll give you that, and I thank you for knowing how to speak.
Click to expand...

"Irish organizations are known to be very racist. They'll disrespect minorities such as blacks and Asians."
uh no

The Departed was a good movie too, I’d take bits and pieces from that aswell.