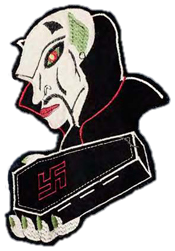 Death Barons Motorcycle Club
Hangaround (Hangie) Basics​
What is a hang around?
A hangaround is just what it sounds like, someone that hangs around the club. They’re a visitor to the club, not even formally a friend of any members at this point in time. This is a good time to learn about the people and the faction itself and see if it’s a good fit for you whether it be timezone, standard of roleplay, or just to see if this is what you want to do. Hangaround are allowed to attend rides and rallies however you must be invited by a patch holder if you’re riding with the club.

What is the difference between a hang around and a prospect?
There’s significant differences between the two. Prospects are treated like shit on purpose, unlike hangarounds (dependent). Hangarounds are simply civilians showing interest to the club, they’re not tied down to it. If they show up for a week and decide this isn’t for them and leave no one will hunt you down or try to find you like we would for a Prospect.

As a hangaround you’re a complete outsider to the club, you’re not tied to it at all. You’re not a representative of the club like a prospect, so pretty much neither the club or you claim one another. If something happens to you or you do something don’t expect the club to go out of their way to back you up and help you. The point of being a hangie is to ask yourself “Is this really what I want to be apart of?” There’s no loss in respect if you decide you want to join another club or just go do something else.
It’s your one and only change to make that decision and have that kind of response.

The hangaround position has an incredibly large amount of potential for roleplay and character development because your roleplay opportunities are endless.

One thing that cannot be stressed enough when it comes to hangarounds, you should never under any circumstance brag, speak of, or ask about a serious time (murder, buying guns, boosting cars, etc). Doing so will probably earn you a very firm ass kicking and no change of joining the club.

It’s a very common misconception that hangarounds have something to prove. You don’t need to be the biggest and baddest motherfucker who isn’t wearing a vest. As a hangaround you can be asked to leave the clubhouse and not come back for making an ass out of yourself. You need to be respectful of others regardless of your time as a hangaround or anything like that. Just because you’ve been here a day longer than this guy doesn’t make you better than him. Hangies are all the same regardless of time, you’re the bottom. Fighting is fine if you do it properly, but roleplaying a tough biker bad ass will not be sufficient enough reason for you to fight everyone ICly.

Put in the effort to be a unique character. Being unique is the only thing that is going to get you places in a club. No one wants this Jax Teller SOA character who’s the big bag dog, has dramatic lines, and a plot you can figure out before it hits its peak. Make a creative character and develop them. Be an average joe who’s out of the military and is looking to fill that brotherhood gap in their life and love the freedom from riding a hog. Roleplay a junkie, a nobody, and become a somebody. A faction like this is the perfect opportunity for someone to become a better roleplay. Clubs want their members to create and develop their character, staying true to what they make their morals and ideals when they first create it.

After some time with the club you will be approached by a patch holder about becoming a prospect. This isn’t always a short or easy process, it varies per club. Under no circumstance should anyone ask to become a prospect ever, this will probably destroy any chance you had of being prospect into that club.

Not a bad guide, but I think that too many factions that approached this kind of MC RP visited ths server, something new would've been nice, but that's off topic, Anyways, good guide!

Ecko said:
Not a bad guide, but I think that too many factions that approached this kind of MC RP visited ths server, something new would've been nice, but that's off topic, Anyways, good guide!
Click to expand...