Faction Complain against "The Reapers of Salvation MC" 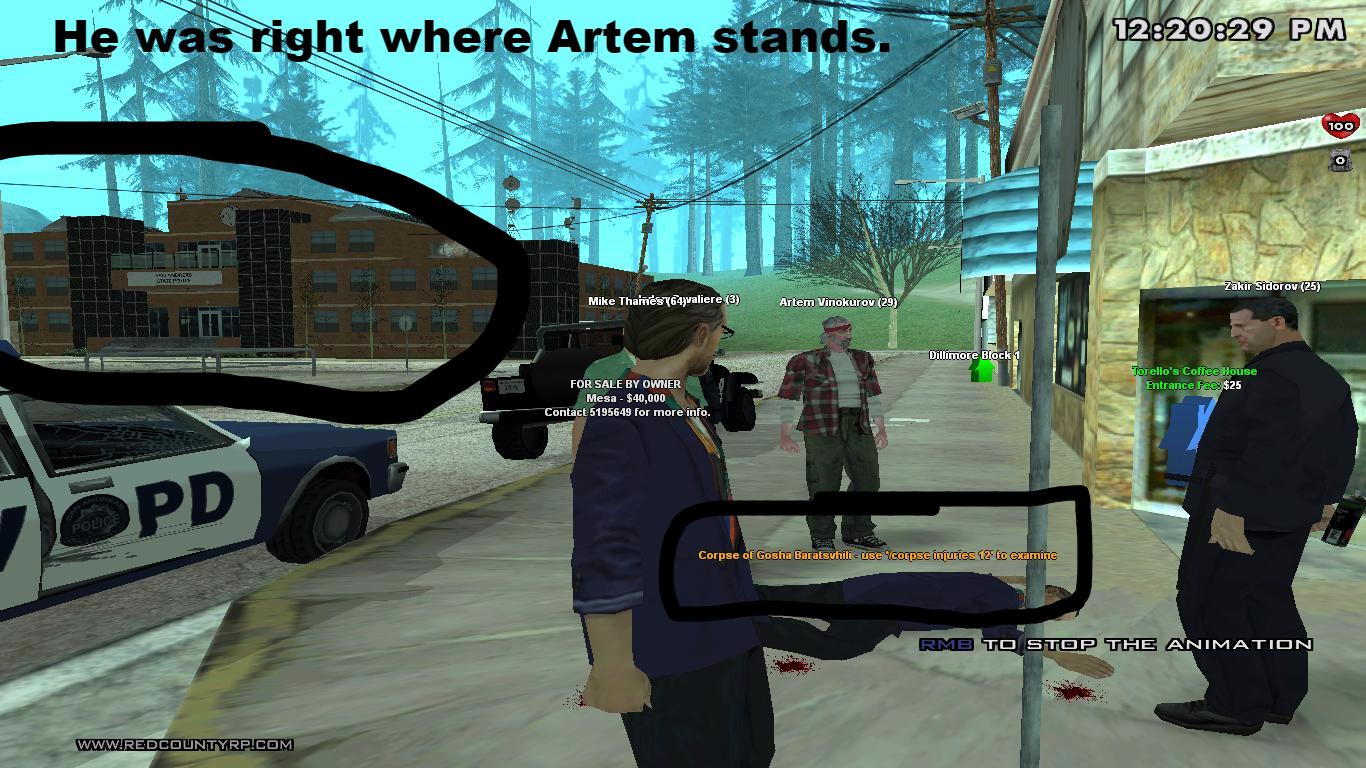 After that he kept shooting on Zakir while Zakir was AFK but I didn't manage to SS it. If he wants to take this seriously he'll accept what he did. Then he was standing there for 1 minute and he ran away.
Witnesses: Zakir Sidorov.
Additional Information: Okay so. We were at the Rat's Pack and we had a convo with philip. I asked Philip to update the sponsorship at the homeless Shelter and he said that I could remove the logo from the shelter's web. So, I said okay and then I said "Good luck with your faggio club" (( My char. has no clue of MCs and stuff, he just didnt know how to call Phil's club)). So Philip decided to start a fight at the rat's pack as he grab me by my kneck and then I RPly performed a self defence move. After throwing him down RPly I asked sorry and I helped him to stand up because it happened out of instict ICly. Then philip said "uhuh" and he punched me at my face. I didn't continue the fight so I wouldn't provoke more so, I backed off and I asked for some Ice. Then philip threatened me saying something "i dont remember what. Smting like "its not over "".


Gosha didn't show any anger at the bar so he wouldn't provoke Philip. But Gosha called his members the next day and told them a plan. The plan was to burn Philip's clubhouse but they had to make it in a way that the crew would not get in trouble. So the crew was dressed up and they painted all their uncovered parts with a brown skin colour. ((Every little detail was RPed)). The crew members got in a boat and burnt the clubhouse using molotvs created by their own. 8 molotovs on the clubhouse and spray tags reading "VK" "Queen City". So even if the VK is the closest ally of Philip the suspiciusness doesnt lead at the Baratasvhili crew since the CCTVs cought 4 BLACK guys throwing the molotovs. So even if it wasn't the VK it could be the PWC or the Bluff Drive crew. There are 0% ways Philip could find out that the baratasvhili crew did the job.


Other Comments: Now I dont how but someway Philip found out that My crew was the guys that burnt the clubhouse. And by some other way Philip found out that we run the Torello's Coffee House (( LOCATED RIGHT INFROTN OF THE PD STATION] but ICly Philip only knew that we run the Homeless Shelter. I saw no proof of Philip trying to find out Who burnt the clubhouse ICly. He didn't even bother to RP the scene.


EVIDANCE OF ALL THE ROLEPLAY BY MY CREW : EVIDANCE BY THE ROSMC's ROLEPLAY -NO FEAR, NO INJURIES RP- THE CLUBHOUSE WAS MAGICLY REBUILT IN 5 MINS 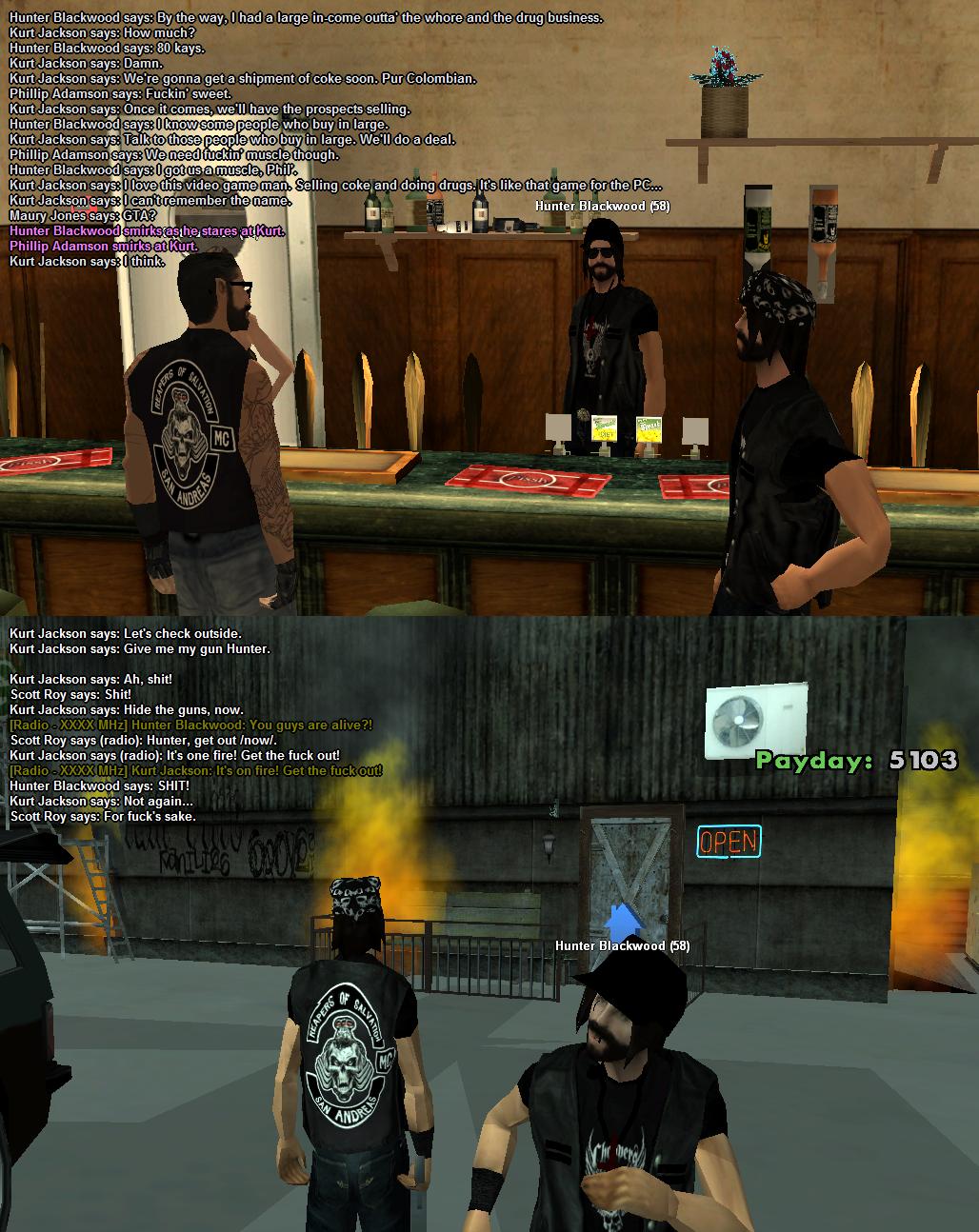 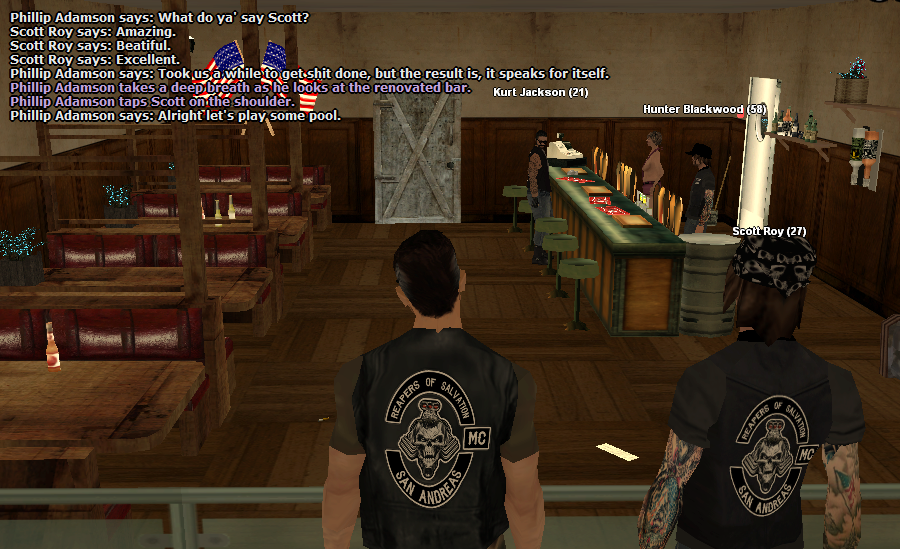 And now some SSs of breaking more faction rules. 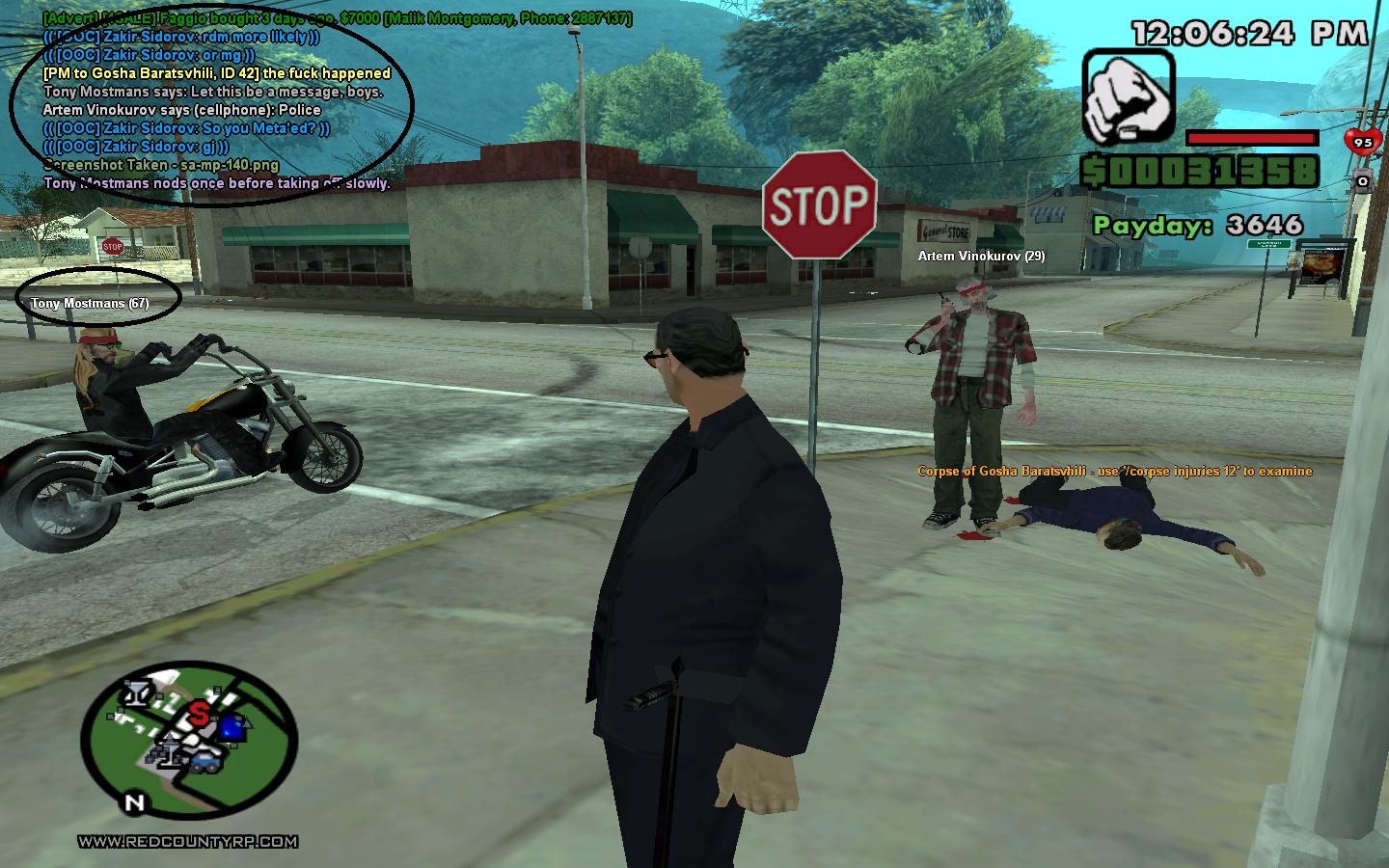 I agree with Gosha's statement, they did Meta'ed by looking through the threads and finding out that we did it, despite there'd be no evidence pointing towards to us.

Here's actual statement from Lars, when we questioned about their motive. As you can see, when I questioned to one of their memebers, Tony Mostmans, he teased me with saying ''find it out IC ''. But when Lars questioned him, he said it himself: ''it was about burning of his clubhouse''.
They said it themselves, that they find it out that we did it through OOC information, when we ICly were dressed up and painted as part of hoodies (aka african-american gangsters).
What I was surprised, is that there were no casulties with the bar, members, or even bikes during the burning.
It takes time for FD to even get there from Dillimore/PC/BB/Monty to Flint County, where fire could've caused more trouble while fire truck was arriving.
The fire power would've been increased dramaticly because of us throwing 8 molotovs, making building cumble down, as well lighting on wooden planks and metalic objects melt.
Yet, they magically rebuilded it like nothing happened, with no injuries themselves. They never bothered to investigate the spray (or that's what I think), they only knew that WE somehow did it.
What's more, is how they even knew we own a Torello's Coffee House, as far as I can remember, I don't recall ANY bikers coming in the bar. There were officers, gold diggers and black hoodlums. There isn't just a nametag slapped on the door saying ''*Person Name*'' with what building they own, hell, they could've thought Torello done it prior us coming to the Shop.

Lmao James187 back at it again with the complaints when something doesn't go his way. First of all, I would like you to not criticize the way my faction RP's when you can barely even speak english. Tony Mostmans did nothing but warn you of your mistake, he took no part in the crime what so ever, so that point of yours doesn't stand.
Second of all, the SS I posted was taken before the incident cause I was offline at the time, I simply posted it later. Third of all, not sure what sorta' physics have you done, but don't expect the warehouse building with aluminium sheets all around it as you can clearly see in the screenshots to be completely collapsed by some molotovs thrown OUTSIDE of it, do you even know what impact does it have on walls, furthermore metal sheets lmao. Fourth of all, can you stop going on about the 4 black guys riding away, that's PG as no black guys were there and I don't have any CCTV's outside the clubhouse anymore. Fifth of all, you're the only guy I have conflict with in the entire RCRP community IC'ly, so there was no other way around it. VK are my plug, Bluff Drive are my plug, and PWC are on good terms with us.
Sixth of all, it wasn't even in front of DPD, it was in front of Pasha's cafe, make the difference. I was masked and had no car parked anywhere near the scene so if I'm found, I'm facing the consequences. ((Oh, and just to let you know, three of your members did the exact same thing to my alt once, right infront of MPD but we let that slide, so take notes))
We all explained this in /pms, why do you gotta' take this to the forums lmao. Furthermore you were the one to start the war with the fire, and you got killed for it. Learn how to lose and move on, it improves the faction's general standard.

Also, to let you know. The clubhouse has not been rebuilt completely so don't jump to assumptions that quick lol

You may not troll or post "meme's" on the topic, you shall be punished if you decide to do so.
Click to expand...

Okay. So instead of taking the Roleplay seriously you start up with no evidance and with hironic phrases.

Fourth of all, can you stop going on about the 4 black guys riding away, that's PG as no black guys were there and I don't have any CCTV's outside the clubhouse anymore.
Click to expand...

Also, one of your members "Kurt" asked me what did the CCTVs catch. And except that, your members saw the guys painted in brown skin paint.

I was masked and had no car parked anywhere near the scene so if I'm found, I'm facing the consequences.
Click to expand...

I'm pretty sure I included everything that has to be said in the first post. I'm not gonna take SS of every /me line I make because when people try to start a war with the club and lose it, quickly jump to the complaints section. If you wanna go in circles about this, go ahead. I'm not gonna bother to explain to you the same thing over and over again when it's all explained in the first post. Bye

And also. The fact that you are good with the other AfroAmerican factions doesnt mean that you couldn't be attacked by them. One of your members could do something wrong to the VK so the VK had to attack you. You didn't even bother searching how would this happen. You just came and kill me at the Coffee House MGing that I own it by the thread. And NOTE that this is not the first time you use threads as info for your IC jobs. You've been reported by many factions, your factions was downed once. Most of the reports are like MG and DM reports. Because your Motorcycle Club works this way 2 years now. We both know that hm? And the rest of the RCRP community.

Oldi said:
I'm pretty sure I included everything that has to be said in the first post. I'm not gonna take SS of every /me line I make because when people try to start a war with the club and lose it, quickly jump to the complaints section. If you wanna go in circles about this, go ahead. I'm not gonna bother to explain to you the same thing over and over again when it's all explained in the first post. Bye
Click to expand...

You have no other choice mate. You have no proofs, I have plenty. You already know that you broke several rules. I've shown everything in my SSs. I saw your DM and MG coming because I already know how you work. "Abusing OOC info via the threads".

There were many old RPers that PMed me that you are going to MG it for sure. Because everybody knows the way you work mate. But this time I got proofs.

Lmao find me a successful complaint on RoSMc. Theyre all made by players in the heat of the moment cause they lose in a situation. You can continue to talk shit about my faction for all I care, just shows how you got nothing else to base your complaint on but shittalking. You can require Gee and Menace to post here if you want, theyre both from
VK and they will let you know about how we met with them first thing after the clubhouse was attacked.
Show hidden low quality content