Your master account: Hartigan
Your character: Adam Campbell
Their name(s): Daniel Dodds
Offense: Unjust a-jail for "unrp-flying" Then failure to understand it was fully Rped.
Re-count of situation/description: Joe came to me with an idea for me to land on a street in monty, him jump out to propose to his Girlfriend, then me come back and pick them up, and fly them off. SASP block'ed the street after realizing what we were doing, to avoid dangers of the helicopters blades, while it landed on the street as slow as I could land it, as I took back off he a-jailed me.
Witnesses: Joe Lewis, Lucy Summers, Calvin Elliot, James Reeve, Charlotte Steer
Evidence:Was unable to take SS of the scene as I was ajailed, but I got one with the conversation of Daniel Dodds "Not careing" that it was Rped. 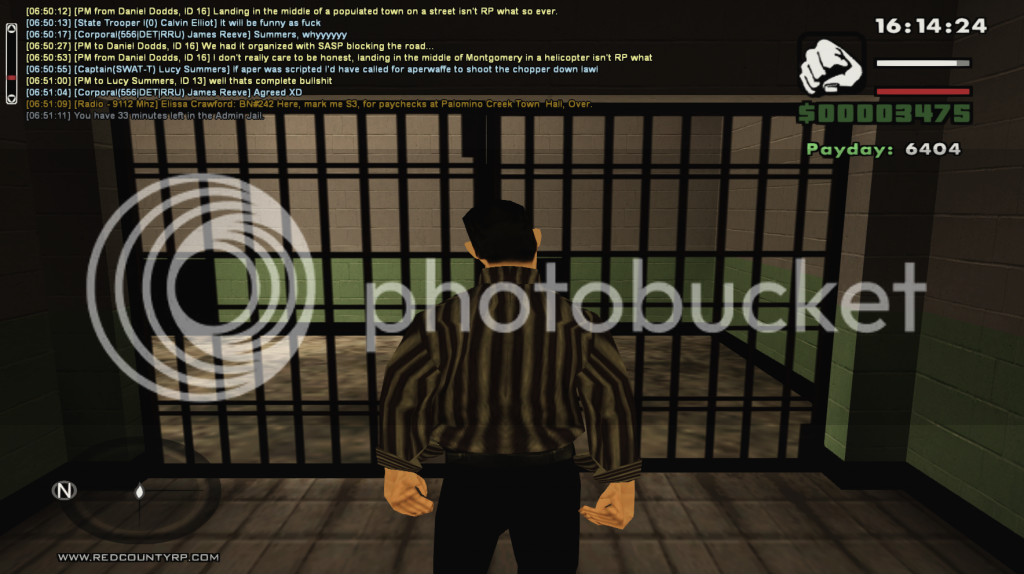 Additional information: I got a jailed because I wanted to get a bunch of people involved in a good, yet funny RP. This is the sort of thing that's making people leave, because the minute they create good RP, admins have to interject. I do not see how hovering/landing a helicopter without anything hitting it is unrp, since its primary purpose and inventing purpose is to hover /land straight down.
Other Comments: Ask any of the witnesses about the scene.

You landed in the middle of Montgomery in a helicopter. I don't deem landing a large commercial helicopter in the middle of a well populated urban town roleplay. Don't give it the sob talk about people leaving because the server is actually increasing in population.

You may not deem it Roleplay, but it was role played, nobody went near it, it was legalized by SASP, and check my small edit, a helicopters prime purpose is to land in a small area, also it was not a "Large" helicopter, its the smallest there is besides a sparrow. Its not a plane, they are built to land in hazards like that.

And yes, while the server is increasing, taking admin interjection for creating Rp also makes the server LOOSE its players, take a look at the aperture thing, as soon as it was back players were back, it was descripted for not making RP when it infact made alot of RP.<Admin interjection where not needed lost players

The conclusion of this complaint is as follows:

Admin Name: Doddsy
Valid: No.
Details: You do not land a helicopter in the middle of Montgomery, regardless of who tells you that you can ICly. Doddsy followed the administrative procedures and took the necessary action.
Action to be taken: N/A